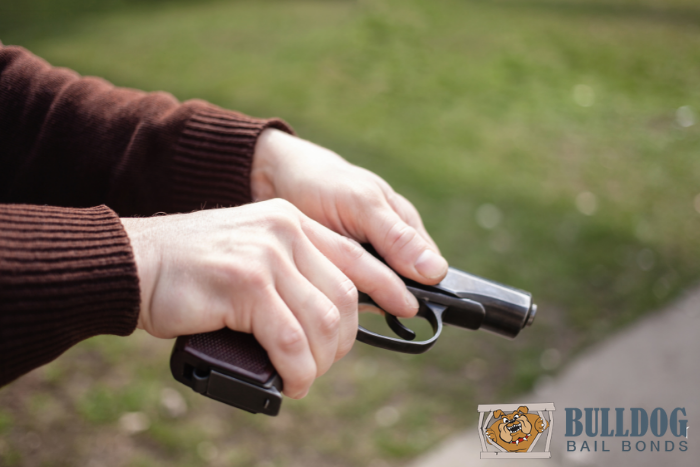 Some people assume that because they’re legally allowed to own a gun or knife that they are allowed to pull it out and show it off whenever they want. That’s not the case at all. California lawmakers frown on you waving your gun or knives around in public and have laws that are designed to discourage such behavior.

First, it’s important to understand that there is a big difference between taking a gun out and showing it to your buddy. As long as you handle the weapon with care, don’t wave it around, and everyone is comfortable with the situation, you’re not breaking the law. That changes if you start handling, or brandishing, the knife/gun in a manner that others find threatening or concerning.

Brandishing a weapon is considered a violation of Penal Code 417 PC which states:

“Every person who, except in self-defense, in the presence of any other person, draws or exhibits any deadly weapon whatsoever, other than a firearm, in a rude, angry, or threatening manner, or who in any manner, unlawfully uses a deadly weapon other than a firearm in any fight or quarrel is guilty of a misdemeanor, punishable by imprisonment in a county jail for not less than 30 days.

Every person who, except in self-defense, in the presence of any other person, draws or exhibits any firearm, whether loaded or unloaded, in a rude, angry, or threatening manner, or who in any manner, unlawfully uses a firearm in any fight or quarrel is punishable.”

In most situations, brandishing a gun or knife in a threatening manner is handled as a misdemeanor. That means it’s not as damaging to your criminal record as a felony, but it is significantly worse than a simple infraction. If you’re convicted of the crime, the maximum sentence the judge can hit you with is serving a year in a county jail or a fine of up to $1,000. Most judges will look at the circumstances surrounding the case and your history with weapons while determining how severe the sentence should be.

If someone gets hurt as a direct result of your brandishing your weapon, additional charges could be filed against you. If you were drunk at the time, you will also likely be charged with public intoxication.

If you are convicted of brandishing a gun or knife, once you have fulfilled your sentencing requirements, here is a good chance that can arrange to have the charge expunged from your record.